The biggest democrazy(not a typo), India goes to poll starting tomorrow. Elections have always been a cause of celebrations, ugly mud slinging and great entertainment in our country and specially in my state of Kerala. From parties whose manifesto contains assurances that they will stop people from talking english and protest the usage of technology and internet(I know, LAME!) to parties who use it a bit too much by spending 2500 Million Rupees ($50 Million) of  money on online adwords campaigns(Mr. L.K Advani, or as we bloggers call Mr. “Ad”Vani), its a total carnival here in the sub-continent. 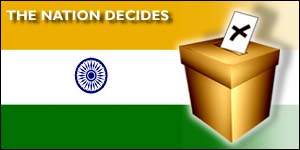 And as far as my political inclinations go, I am with the Indian National Congress(Congress) more than the Barathiya Janata Party(BJP) for the simple reason that the latter is more like a religious communal party who wants to kick all the Muslims out of the country and change the name India to “Hindu”stan. Communal issues should never be a partys’ agenda in a country like India.

This is going to be an awesome month of entertainment on TV and newspapers!

If you are not voting this month, I really want you to get out of your home, office and wherever and vote!

P.S: If you are from Trivandrum, I would want you to vote for Mr. Shashi Tharoor, cuz we have a online “Bloggers for Shashi Tharoor” campaign going on for him!