My twitter account was hacked a few weeks ago, thanks to a rogue app that ended up blocking all my followers, my follows and everyone on my lists. It was annoying to say the least, seeing over 2500 awesome tweeps blocked. Since all my network was blocked, I was no longer able to follow them without unblocking and Twitter does not have a “bulk unblock users” yet.

Turns out, third party apps that do this are not popular either. Here are two apps that help you manage your blocked users individually and in bulk. 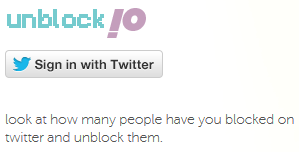 A simple application that worked the best for me. It shows a list of every you have blocked and has a “Unblock all” button that unblocks 100 users at a time. But once the unblock is complete, the page stays blank, so you might need to refresh the page to see more blocked users. But it works pretty well otherwise – unblocking 1000 users took just 10 clicks!

This is my second favorite tool, the only reason for it being second is because it does not have a “bulk unblock” button like UnBlock.IO does. But it does list all blocked users with a button that allows you to unblock them individually. It is useful if you have only a few followers to manage.

First step to prevent something like this from happening is to secure your social media profiles. Obviously, have a strong password. Remove permissions to API based apps you no longer use on both Twitter and Facebook. I was surprised that I was using over 200 apps on Facebook!!

Kochi Metro - Another White Elephant in the Making

Kochi Metro - Another White Elephant in the Making